What must I do about my monthly debit order?

We are all concerned right now and rightly so. Both local and global markets are down more than 20% over the last quarter and many investors are concerned with their investments. Any drastic changes now, such as disinvesting or moving to cash, can have a damaging impact on long-term wealth accumulation prospects. These types of changes will only lock in losses. The best course of action right now is to stay invested and allow your investments the time and opportunity to claw back value over time.

But what about us that are investing monthly via debit orders? Should we stop these and wait till the market picks up again? The simple answer is “No”. Our advice is to continue investing. As hard as it is  to see your money down, there is one advantage of “down” markets and that is “cheap” units.

Consider this hypothetical example. Two investors, A and B, are investing R 500 via debit order into the same mutual fund (they are effectively buying units each month) over a certain period. The price of the mutual fund for a brief period increases followed by a period of underperformance and then recovers and outperforms. Over the period, Investor A stops their debit order some time into the period of underperformance and then restarts late into the period of outperformance. Investor B continues their debit order over the entire period. 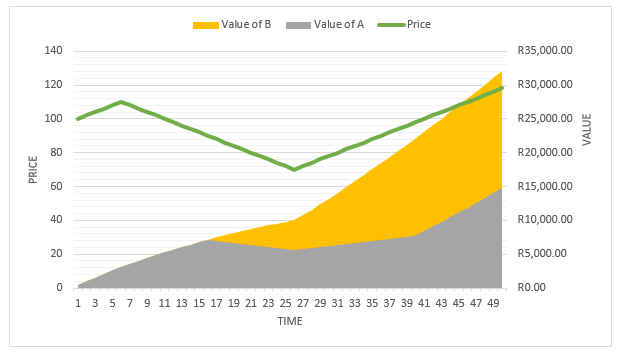 The green line represents the price movement of the units. This is shown on the left axis. The value of investor A and B’s portfolios are shown on the right axis.

By looking at the graph, you can see that value of Investor A ended around R 15,000 and Investor B ended at around R 32,000.  You can also see the movement of the price. It started at R 100 per unit, briefly increased to R 110 per unit, declined to R 70 per unit and then recovered over time to R 120 per unit.

It is understandable that Investor B would have a higher ending value and total units bought compared to Investor A. This is because they invested (bought units) over the entire period whereas Investor A stopped for a period of time. For example, at the beginning of the period when the price was R 100 per unit, with a single R 500 debit order, both investors bought 5 units. Therefore, we cannot conclude that investor B ended in the best position because of the higher ending value or total units bought.

To determine this, we need to look at the average price per unit each investor paid over the period. For investor B, who invested over the entire period, they paid on average 93.8 rand per unit. This is because they continued to invest when the mutual fund underperformed, and the units were cheap. Investor A, who for a period stopped investing, paid on average R 104.2 per unit. This is because for most of the time the price was low, they did not invest and ended on average paying a higher price per unit.

Therefore, by continuing to invest over the underperforming period, the average price paid per unit by Investor B was much lower compared to Investor A. Although Investor B had a higher total cost because they continued to invest, their ending value and most importantly their total return was almost double that of Investor A. This is because they continued to invest in “cheap” units when the market was going “down”.

We are monitoring your investments on a daily basis and encourage you to stick with your strategy and the monthly debit order investment/s.  We do not know when the market will recover, but it will eventually, and you will reap the benefit of your discipline during these uncertain times.

FOR OFFICAL INFORMATION ON COVID-19 IN SOUTH AFRICA